Carp angling Iktus Ruffard lake in France came to our attention last year as a new water run by the Iktus group. The lake itself is situated in a lovely location amongst the pine forest Gimel-Les-Cascades. So we booked the Island swim c for the last week of April. We took a chance with this swim as there were some deeper water at this end of the lake. The winter had proved to be long and cold so Simon my regular French fishing team mate agreed we would go for it.

Travelling to Iktus Ruffard Lake in France from the UK 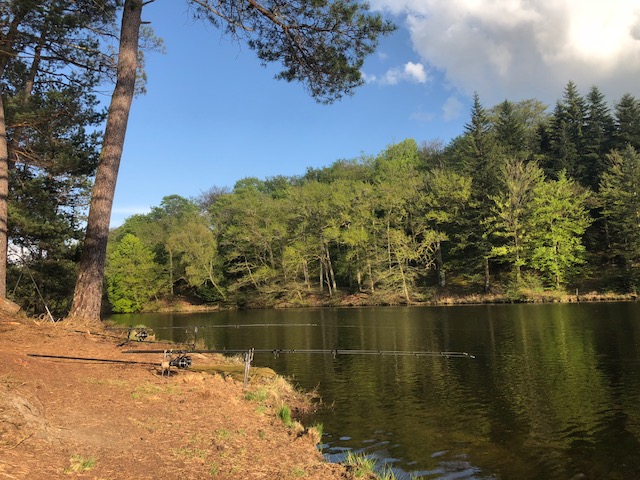 Our preferred crossing is with one of the ferry companies from Dover to either Calais or Dunkirk. Tolls from Dunkirk are cheaper with a long run on free roads towards the Paris area. On this occasion tho we opted for Calais as we had further to drive and the shorter crossing time was more convenient. The drive was longer than anticipated just under nine hours. We arrived before our allotted start time though and Danny the Baliff was on hand to give us some last minute instructions. We paid the 50 Euro for the boat we needed to access our chosen swim. 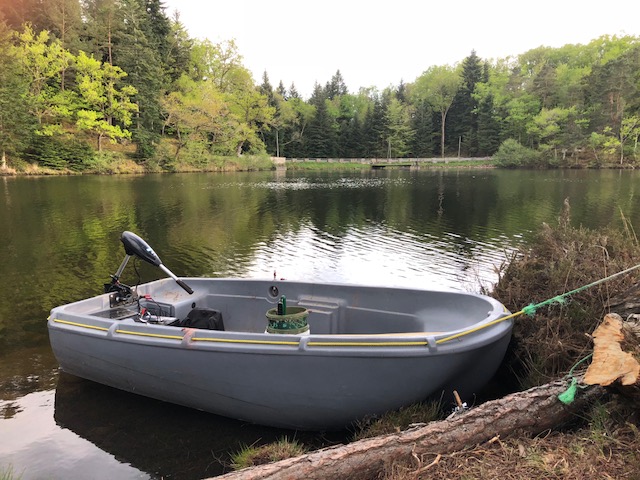 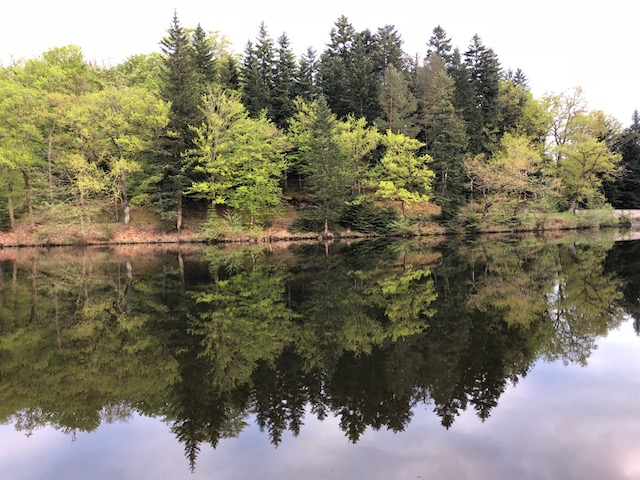 So we headed straight up the lake to our home for the week ahead. Over to our right a couple of French anglers were also setting up in swim A. We nearly booked that swim but opted for the island. Opposite to A is swim B also being fished by French anglers. We were surprised by an ambulance with with lights flashing coming along the road on the opposite bank towards swim B.

We found out a little later the French angler was trying to wheel his trailer to the swim and lost control. It tipped up with the heavy load and the hitch had cut his leg wide open as it had lifted into the air. He was taken to hospital for the night and couldn’t continue with the weeks fishing before it had even started. We all need to make sure we don’t take unnecessary risks when a long way from home in a different country. And a sobering reminder to ensuer you have good travel insurance, medical cover and an E111 card. Nice touch by Danny who refunded the anglers money. We also found out the angler who would have been our neighbor on the island in swim D hadn’t turned up, this was good news for us as we could use some of this area from our swim. 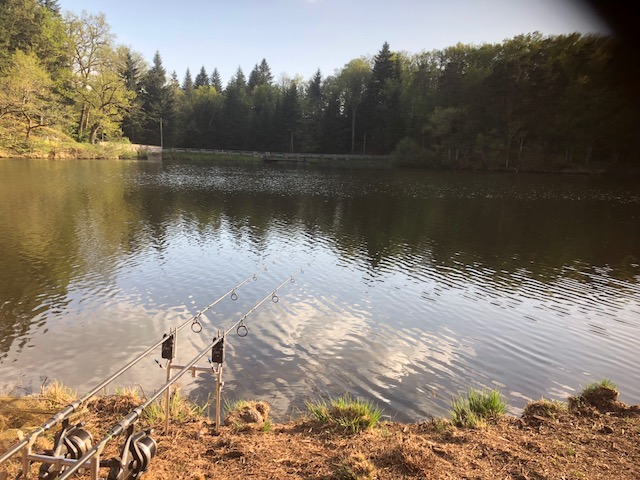 We found some decent areas to fish our first night, didn’t see any fish show anywhere in our swim that first day or night and no action came to our rods. The weather had changed from cold to very warm in a couple of days. We spotted some of the Koi that had been stocked in the lake by the new owners of the lake. I did spot a couple of decent sized mirrors following them a bit deeper down in the water. They were all in a bay where an outlet feeds the river. After trying zigs all day I’d had enough of chasing them around, so we set our baits for night on the two corners hoping to intercept them on the way out during the night.

Catching a big mirror carp at Iktus in France 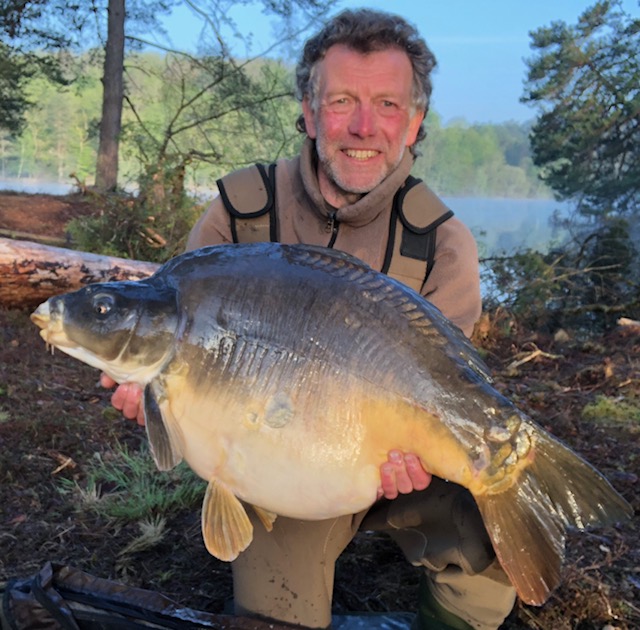 No action through the night, but at six in the morning a nice slow take on the right hand side which as it turned out to be the biggest fish of the trip: a lovely 38lb mirror to my rods. No more action or fish had shown for a couple of days, so we decided to relocate Simon’s baits to our left in front of swim D. This paid off at three in the morning with Simon landing a nice common of just over twenty pounds. Our fears that we could end up with the fish vacating our area for the shallow water at the other end of the lake looked like it may become a reality. We had one more fish from that area of 21lb before the area seemed devoid of carp of any sort. 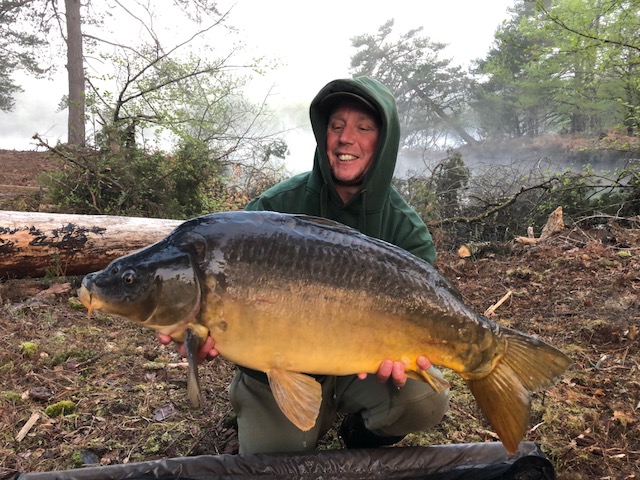 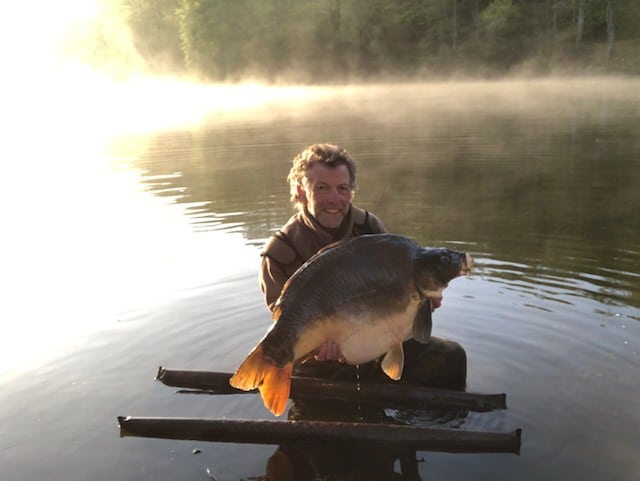 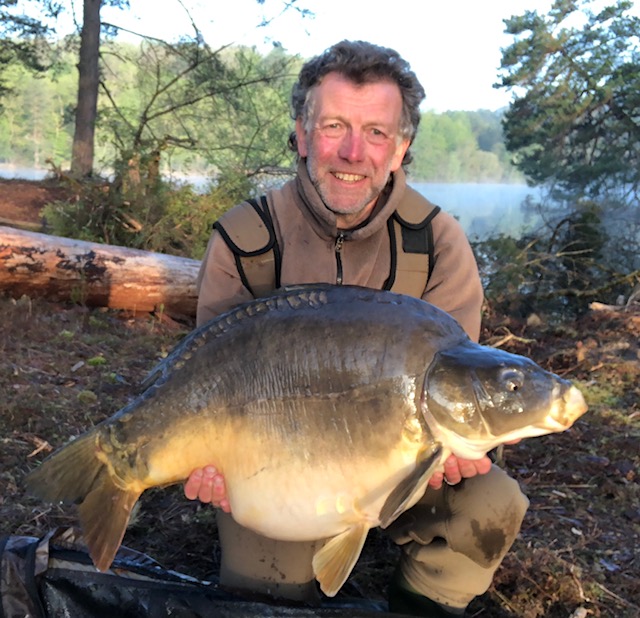 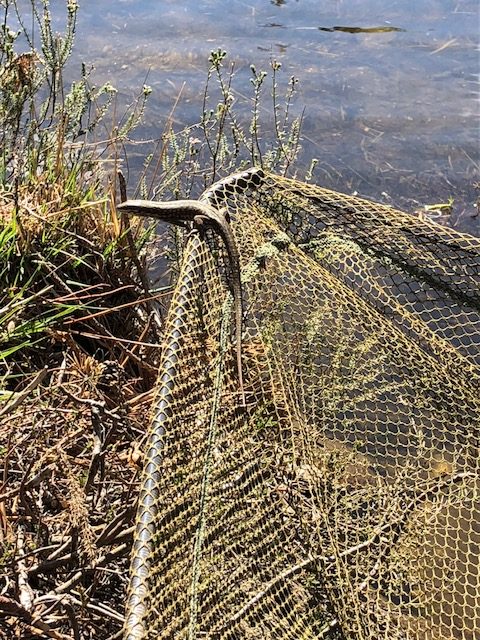 Word was reaching us by some Facebook posts by The bailiff Danny of catching three in a night at the other end of the lake. Most of the swims at that end of the lake were producing fish regularly. Very frustrating for us not being able to move once you have chosen your swim for the week. The weather was getting warmer so no reason for the fish to come back to our end of the lake in the immediate future. I did walk through the forest to try and find somewhere to have a few hours during the day in the shallow end of the lake. But there is no way through to reach a vacant swim, our problem was going through all the other anglers in our boat to change swims. So three fish for the week for us, the two French lads unfortunately didn’t have a bite. Two French anglers at the other end had 38 catches between them. Iktus Ruffard is going to be a great place to fish but I rather fancy it’s going to be very swimmy with anglers not able to get on the fish, but it was nice to get some needed sunshine. 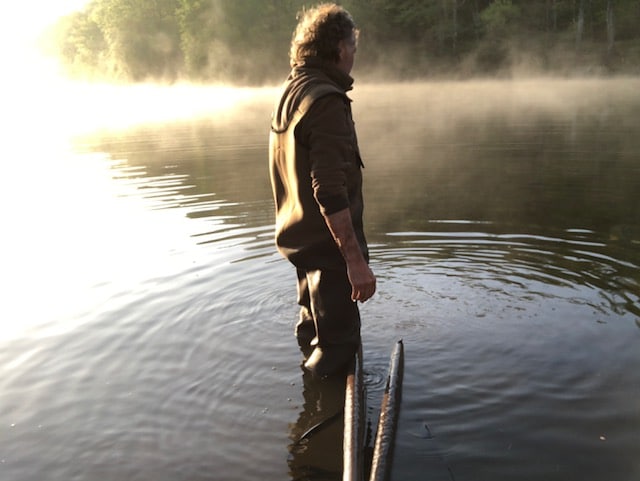