Carp Fishing and Camping in Kent 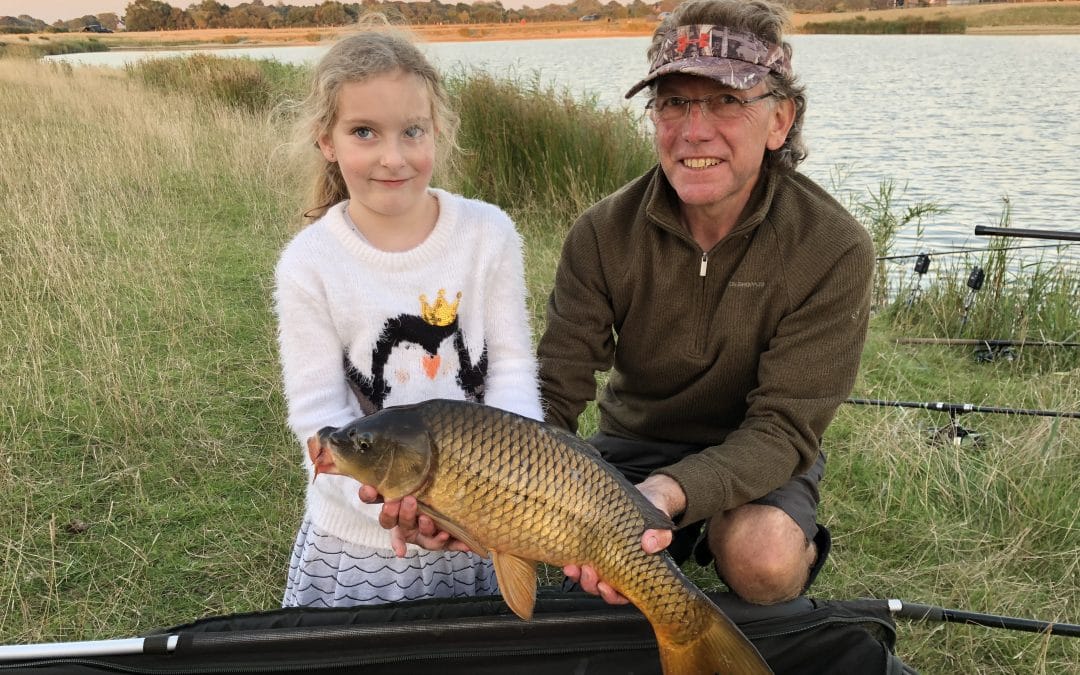 In August 2018, Trevor took me (Jonathan) and two of my children (Max & Isla) carp fishing and camping at a Mid-Kent Fisheries venue. It was a great adventure for the children who had never been fishing before. In this age of iPads and XBoxes, it was lovely to see them revel in the joy that the countryside can bring. What follows is the story of our two days angling for Carp and rudd.

Camping at a Fishing Lake in Kent

After a bumpy journey, we arrived at the mid-Kent fisheries venue. The mini was packed with camping gear. Trevor, being the expert had a far more practical Freelander loaded up with his bivvy and all the angling gear.

It was a fresh Saturday morning in Kent and, after a few minutes, we had Trevor’s spare 3 man bivvy up and ready. My first learning point of the day: You can’t take a regular tent when carp fishing and camping. You need to have a ‘camoflage’ bivvy which has colours more sympathetic to the environment and has a lower profile physically. Definitely important to respect the environment and disturb it as little as possible. Nature is beautiful, we need to keep it that way.

While I had been putting up the bivvy, Trevor had been busy getting the rods and carp fishing gear set up. He had three very long fishing rods sitting on their rests already cast out to the water. All the rods had bite alarms set, meaning that as soon as a fish took, he would be aware and could reel it in. Second learning point of the day for me was when Trevor took a catapault and pelted a load of “Boilies” which I understood to be a form of fishing bait, into the lake. When I asked why, he explained that for the fish to take the baits on the lines, they had to think that it was normal and representative of the surrounding foodstuffs.

Trevor also fed the boilies into the lake using a plastic rocket shaped capsule that he filled with boilies and then sent a long way into the lake, brining it back in an intermittent jerking motion. This seemed to be designed to spread the boilie trail in a line from where the fish were back to the bank on the other side of the lake where we were located.

Not long after the gear was set up, the fish started to take. Trevor coached Max, Isla and myself on how to land them. We all took turns on holding the landing net while the angler brought in the fish. Learning point 3 of the day was that bringing in a fish that has caught the hook is not straightforward. As a total novice, I had always assumed that once the fish bites, all that you need to do is to reel it in.

Trevor showed us the technique that he uses to get a very good rate of landing fish that are on the hook. It seemed be a combination of no reel with pulling, followed by reel for a few seconds, followed by no reel and pulling again. It looked entirely logical while I watched him teach it to Max. Max picked it up straight away but I found it much harder to master. Isla was too small to do all of the work, so Trev manned the rod with her and they did it in tandem.

After a long day of fishing for carp and rudd, the kids were exhausted as was I. Trevor, being used to the enviroment was still keen to cast out ‘one more time’ but even he was ready for his sleeping bag before 11.

Cooking Round the Campfire

We cooked sauceages and burgers on my portable camping BBQ. I have to say this is a really good piece of kit to take with you. Very small, compact and gets great results. The kids, with full tummies and tired legs clambered into their sleeping bags and were asleep before their heads touched the pillow.

I stayed up for a while and watched Trev as he cast on a neigbouring lake for a carp that he was after. Learning point 4 of the day was that professional carp anglers will know exactly what fish are in which lakes. Literally able to identify them by their markings. See The Pretty One for a good story on this.

Sleeping in the Bivvy

It was a very cold night in the bivvy. Even in July, it can be bitterly cold at night if there is no cloud above to insulate the earth. We wrapped up warm overnight & I was glad that Kelly, my wife had packed a couple of duvets for us, to go over our sleeping bags. I was also rathe envious of Trevor’s sprung camping bed and rather decided that I would have to hunt down a few of those for the next caming adventure.

The next morning, it was a beautiful, clear morning with a stunning blue sky. We cast out again and waited for the bites. The fish were just as keen today as they had been yesterday and there were lots of catches on the bank.

That’s All For Now…

It was a genuinely transformative experience going carp fishing with my children for the first time. The whole experience was incredibly developmental for me and my children. I will blog again about my journey in learning how to fish for carp.