Carp Fishing in Kent – The Garden of England

This is a reprint of the article “Carp Fishing in Kent” written for the Carp Talk Weekly Grapevine column in October 2003 by carp angler Trevor Ellse.

Welcome to another ‘Grapevine’ on carp fishing in Kent. I was interested to read in another contributor’s article how we always start our articles by commenting on the weather. Well, here we go again! Our sport is so reliant on weather conditions, not only for some action from the carp but it also seems to affect our own confidence in the way that we approach a session for a particular lake or swim. The weather is so important for the environment the fish live in. With this in mind, the move from the Environment Agency and local water companies in the South to go to a drought-monitoring situation because of the lack of rainfall this autumn only confirms how low the water levels are. The last couple of Octobers have produced a lot of heavy rain, leading to floods across the county, but without significant rainfall in the south this winter, there will be some serious implications for some of our waters next spring and summer. I am in touch with drought-monitoring committee, so if you run a water and need further updates on the situation, you can contact me on 07771 702801. 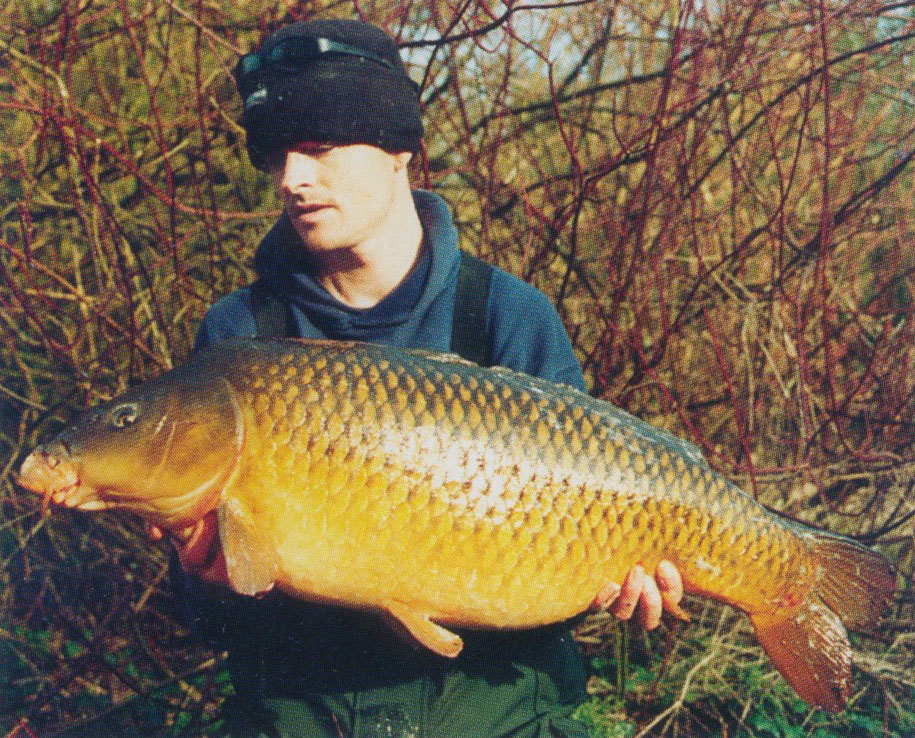 My own carp fishing in Kent has been limited to a few overnight sessions on Conningbrook this month due to work commitments. I have decided to have a go at fishing short sessions on the Hythe Canal this winter. The Canal has produced lots of winter captures in the past and now that the dredging is complete, giving more depth, the fishing should be good. Thanks to Paul the bailiff for the report on a 261b mirror and 251b common from the Prince of Wales stretch in the last week or so. Apart from these captures, the banks have seen little activity from anglers.

I have been asked to extend my coverage to take in the whole of Kent so I will do my best to bring some new waters into the spotlight. Thanks to Brian Allen for the info at Fordwich. Brian had six doubles in a 24-hour period in a cold north-east wind, but as the mild spell continues the fish seem to be harder to catch on here with only another six fish landed in the last two weeks. Steve Cox landed the lake’s largest common at 3 llb and the Koi Common was caught off the island at 281b 10oz. Stonar Lake is also a bit slow with a only few doubles being caught.
The one exception was a mirror of 271b 14oz. This water should start to pick up as winter settles in at this venue. generally fishes well in the colder months.

Dave Rolfe at Hookstead Lake is running a series of 48- hour carp matches throughout the winter with all proceeds being paid back out in hard cash. The next match is this weekend ( commencing 28th November) booking in at the on-site tackle shop at 7am. The news on captures at Hookstead is good with plenty of doubles landed and local angler Paddy landing a fish of 301b 2oz. A day-ticket angler also landed a 241b common recently.

There’s not a lot of news from Mid Kent Fisheries at the moment, my work commitments not allowing my usual wander round and the bailiffs having only just returned from holiday. We will try to catch up next time. Fishing a two-night session from the Bailiffs Swim on Mainline Chilham, Nigel Turner landed mirrors of 241b 9oz and 271b 11oz. Conningbrook has been busy since my last report. The ‘Brook is not renowned for its fishing after November, but Steve the Taxi Driver followed up his success last month with two fish in the same session, netting the Friendly Mirror at 421b and a mid twenty whilst fishing from Ghosties in a strong north-easterly wind. Petfood Paul landed White Tips at 331b on one of his overnight sessions, and John Bird caught the Long Common at an impressive 421b from the bay.

Nickolls Leisure has continued to fish well, but on the downside Derek the bailiff has had over £7000-worth of tackle stolen from his hut recently, So if you have any cheap tackle offered to you while carp fishing in Kent please contact either myself or Derek on 07767 480929.
Martin Myland landed the Italian at 281b 6oz. In recent weeks a new member known only as Neil fishing for a week from the Carpet swim landed twenty-eight fish including five twenties with the largest being the Italian again. John Wey moved into the same swim and had fifteen fish to 181b. Kevin Rees fished the weekend in the main bay for eleven fish to mid doubles. Any fishmeal boilie seems to have the required effect at the moment. 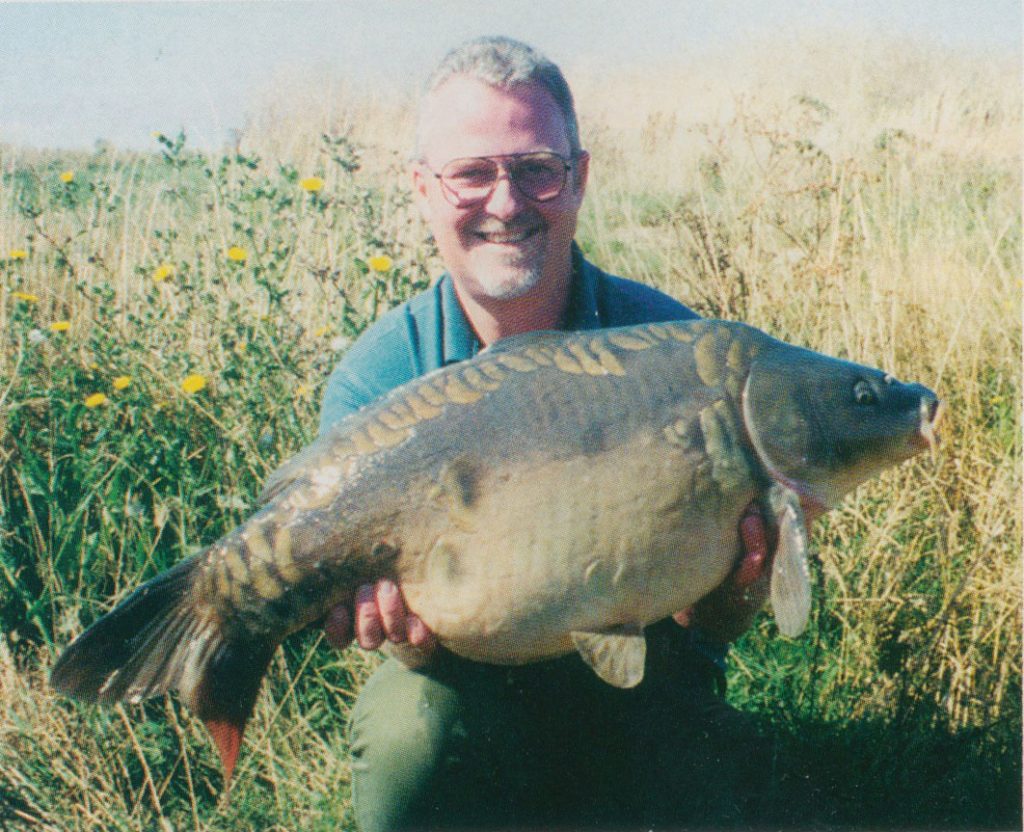 Cottington Lakes are a bit slow at the moment with only a handful of doubles caught to day-ticket anglers. Steve Cousins caught the only fish of note at 24½lb. Fishing should improve as the weather settles, as again this is another good winter water. Cottington will also feature shortly on Sky TV’s ‘Tight Lines‘ where you can win a week’s fishing holiday in one of the on-site static caravans and £100-worth of Ant Bait
That’s all the news for carp fishing in Kent this month. Hopefully, some of the photos promised will reach me in time for the next update. 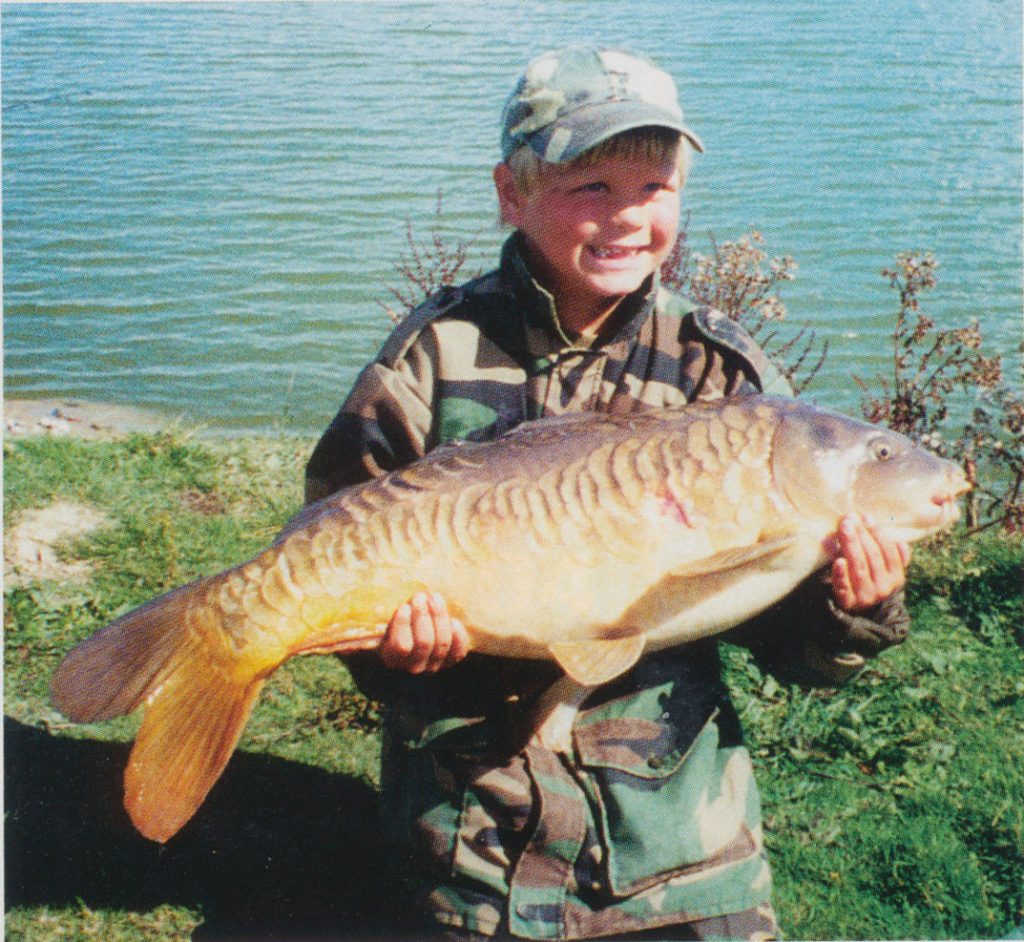 Here is the original cover of this weeks Carp Talk – I featured on the cover. 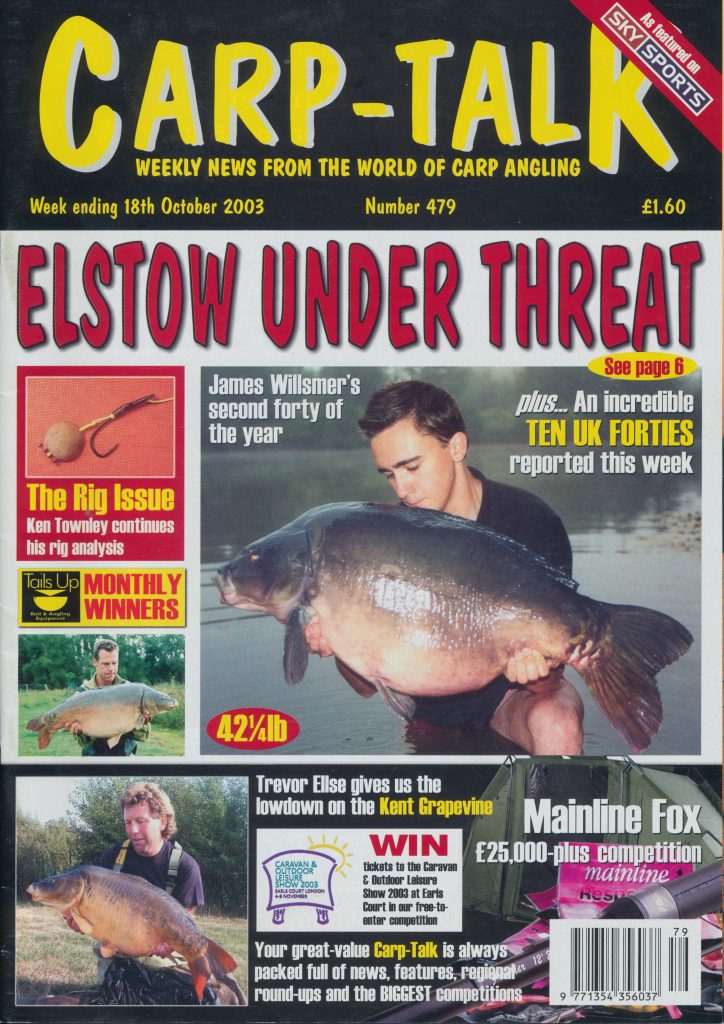