70lB Carp Caught in the 90s: Back to the Der and Record at Orient 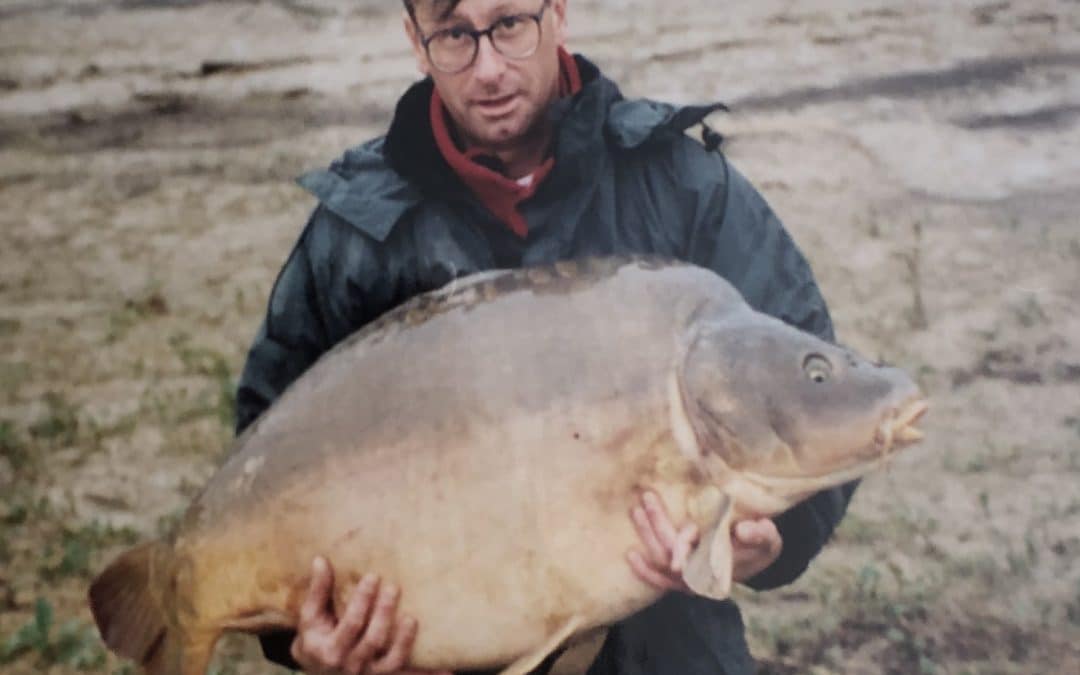 Back in the early nineties, my friend John from a local marsh pit we had been fishing was asking about fishing “The Der” in France. I didn’t need much persuading to go there again, so plans were made to visit the big lake in France. I had previously fished there with Paul and Dave a few years before with a boat at our disposal. In those days I didn’t have a boat of my own, but being used to long range fishing, the challenge was to catch them from the bank without the use of a boat. The area we ended up fishing was by the port, to the left of the boat ramp and the inlet where all the expensive boats were moored up.

Further round to our left three French anglers arrived and set up with about 500 yards between us, They were set up with a boat and outboard engine, fishing about two hundred yards further out into the lake, past where we had cast from the bank. I must say when we were casting 150 yards plus it only looked about 50 yards with such an expanse of water in front of us.

Three nights in and we hadn’t caught from our shortened range, the French lads had caught a few by now. We got together for a social to discuss tactics. Jean, who became a friend after this trip, asked if we wanted to use the boat. Well it would have been rude not to. It was obvious the fish were a lot further out in front of us as we had seen them showing way past where we were fishing, I accepted the kind offer of  the boat, electing to row all six of our rigs to the spots so not to flatten the battery for our French friends. This was our last chance as we had already done three of our allotted 4 nights on the water, The next morning one of my rods was away, hooked on my favourite French big water bait Rosehip isotonic from Mistral baits. Jean asked if I wanted to use the boat to go out to land the fish. Instead, I elected to play the fish from the bank. After what seemed an age, the fish was in the net. Pleased that John had scooped it up at the first attempt. It was what we had come for: a typical Der leathery mirror carp of 31 pounds.

The boat was the key, fishing at those extreme ranges. I have been back since and caught a few casting from the bank on day only sessions, fishing areas that are not normally fished. Jean and I kept in touch and a while later he wrote to me asking for some photos of their fish on the Der as their photos weren’t very good. I obliged sending him the photos I had taken as this has become something I enjoy as much as catching itself.

A reply came soon after, explaining that they had moved venue to the Orient, another large venue in the next Angling district further south. Some years previously I had fished there myself with Paul and Rod. Unfortunately we didn’t catch anything. My overwhelming memory of that trip was finding dead fish tethered in the trees on Braid  that had been lost by anglers. There was yards of the stuff tangled all around them. We also met Des Taylor and Rob Hales who invited us to move on to another water called Dream lake, the original lake near Paris. That’s another story for another blog,

Back to Jean’s letter with some photos of a huge carp he had just caught from the orient. He went on to explain it was a new personal best and lake record of 74lb, bearing in mind this was the early nineties that was a huge fish, I’ve kept these photos to myself all these years and I’m no longer in touch with Jean, so hopefully we could communicate again now with all the means we have at our disposal these days.

Up to Date Tactics for Carp Fishing in France

Coming back up to date with tackle and tactics for a large water like the Der; I wouldn’t now travel now without a decent boat & engine with echo and gps to map likely fish feeding areas. Tt extreme ranges I would also be using braid for better bite indication and contact with little stretch for control while playing fish. A shortened landing net for use in the boat if you have to take to the water to claim your prize fish. A good quality bivvy and plenty of clothing.

The Gear I Use

I always take two automatic inflatable life jackets in case one gets wet and inflates. Bait is a personal choice but I always use Mistral ready made chopped and rehydrated with lake water and flavour. I’ve found this over the years to be a real game changer on most waters in France. I always take hemp and ground baits, this also helps when baiting the spots, it leaves a nice colour in the water to place your baits over if you’re not using markers. I tend not to use them anymore, the most important aspect of going on these trips is a fishing friend you know you are going to get along with and fish as a team, as it can be a very harsh environment at times.

Hope that’s of interest to someone – leave me a comment below, especially if you’ve got any questions: