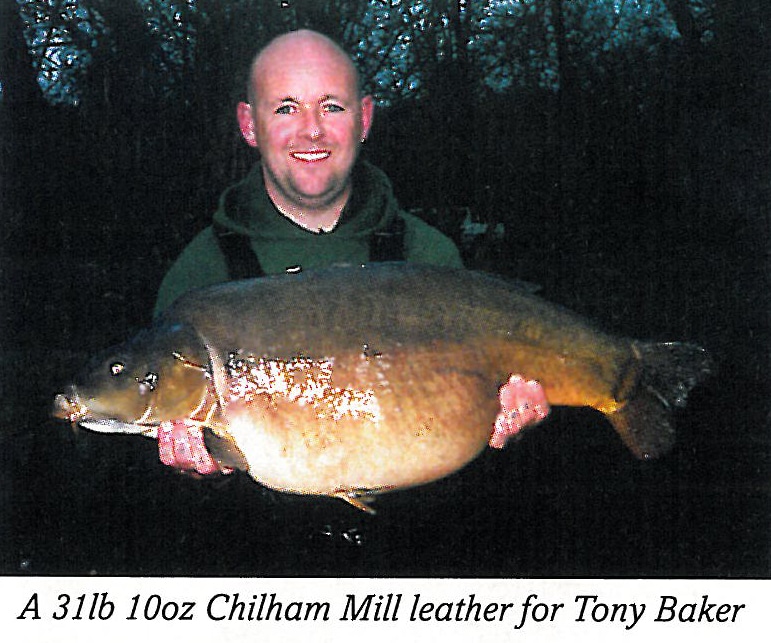 I’ve always been a big fan of Mid Kent Fisheries as they offer excellent value for money. Having been part of the Kent carp scene for many years now always having an interest in other captures around our region, I’ve tried my share of lakes. This month’s grapevine would suggest we have never had so good as regards choice of venues containing 20lb plus carp. The Mid Kent Fisheries ticket is the best value for money with so many waters containing big fish. They have a new venue on a separate ticket an established fishery for many years and consists of four large lakes known as Road & Island, Railway lake, lake no.2 and lake no.3. This site is a new country park project, a joint venture between the local council, Berkley Homes and Mid Kent Fisheries. These lakes are part of carp fishing history in Kent, With carp to 40lb and many known 30lb plus fish. I am hoping to persuade captors of some large fish from other less well-known venues to share their success with the Grapevine in the near future. 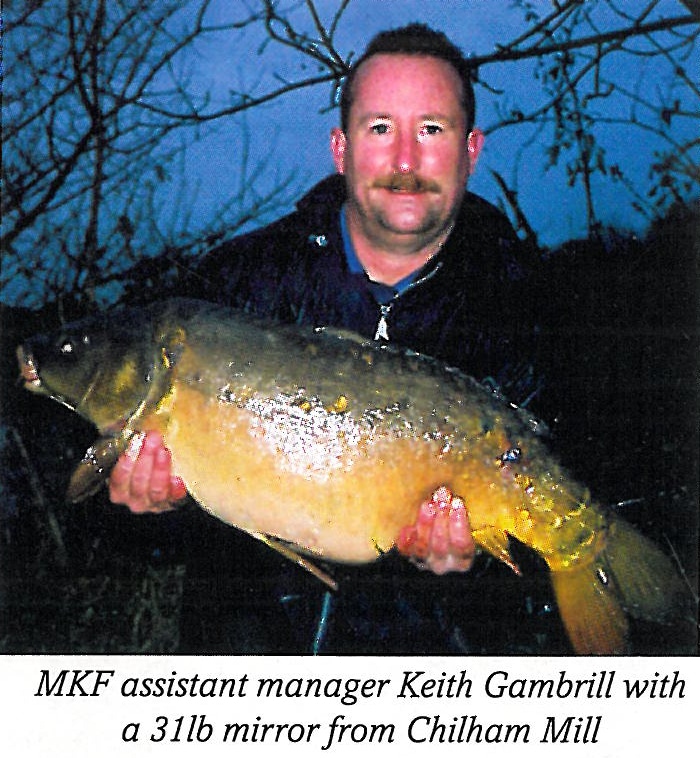 With the warmer weather arriving in early March, Anglers were keen to take advantage before some of our waters closed down for the traditional closed season still being observed by some clubs. I still can’t quite get my head round fishing at this time of year. But this didn’t stop me sharing a 20lb fish catch with my two sons Stephen and Kevin on an overnighter at Nickolls Leisure. The biggest, a Common of 18lb to Stephen; all fish fell to Mistral remedy and Rosehip boilies. Would the person who walked off with my landing net please leave it with Derek at Nickolls! A footnote to this venue, day ticket anglers are restricted to fishing the main lake which can be very productive in the right conditions. Most of the fish are being caught in the works section of the lake at the moment. This area can be fished with the purchase of a Mid Kent Fisheries season ticket. 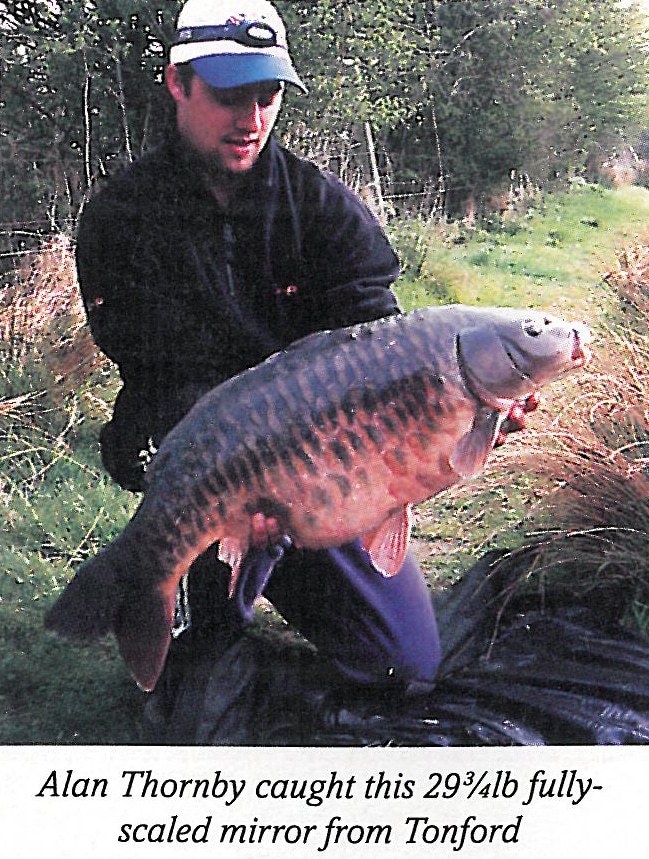 Thanks to Bamber at Premier for reporting these captures at Fordwhich. John Knowles, a newspaper wholesaler fishing a two-night session on Premier Matrix taking the lake record common with a fish of 29.04 and also landed a mirror of 25 in the same session. The old close season still applies at Fordwhich so the lake is now closed until the 16th June. Colin Markwell put in a 24-hour session on Birch Pit on the Canterbury ticket for three doubles on his pop-up maggot rig. Chilham Mill on the Mid-Kent Fisheries ticket has fished well since the Easter holiday producing 11 new thirties in nine days. 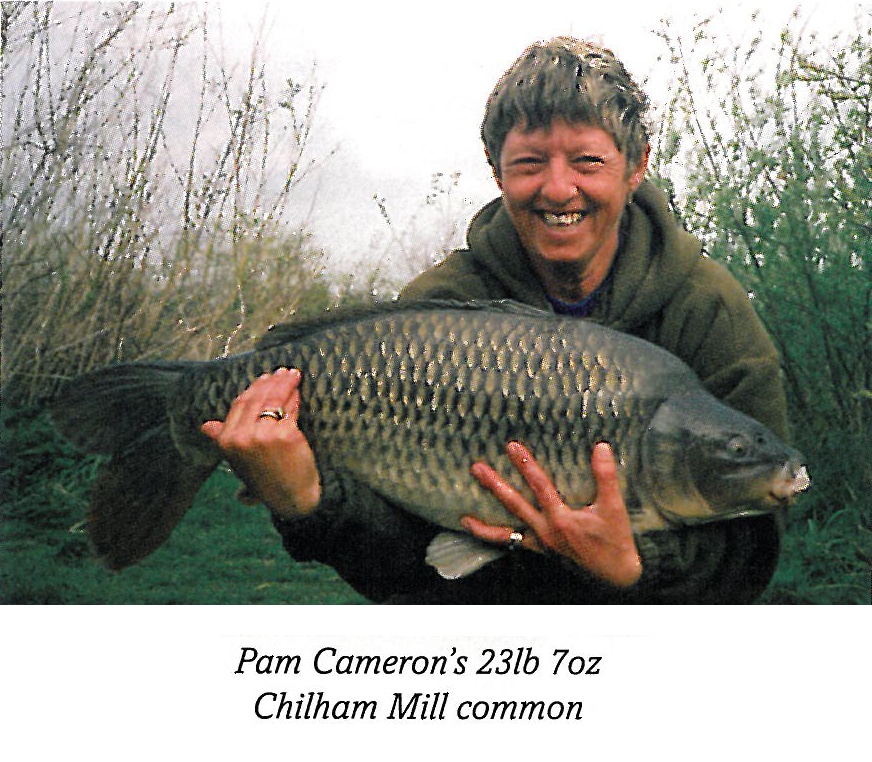 Pam Cameron form Orpington out-fished husband Colin taking a Common of 23.07 and a Mirror of 25.02. MKF Assistant manager Keith Gambrill had a 31lb common and a 31lb mirror and two twenties in March. Tony Baker had a run of success taking 30lb Leather and two mirrors of 30.04 and 28 .02. Roger Coomes had a four fish catch along with his first thirty in the shape of a 33lb common from the Mill, the first time out with his new Imprezzer rods from GB Baits. This Champagne moment was celebrated with fisheries manager Chris logsden and wife Linnie who provided the Champagne.

Gary Searls from GB Baits had six fish in two nights with four twenties 21.22.20.6. And 23lb, with two upper doubles. All caught on 14mm-flouro snowman x-ecute pop up boilies over the new GB pellet.

Chilham Mill is now closed until 13th May

Still with Mid Kent Fisheries, Alan Thornby from Ashford Tackle had a four fish catch from Tonford topped by a lovely 29.12oz Mirror again caught over the new GB Pellets with Kent Mix from GB. Mill Pool and Wood pool at Faversham have fished well producing fish of 27-29 and 30lb.

Stephen “Taz” Witt fishing on Stour Lake at Chilham over a ten day period has had a run of success taking nine carp from 12lb to 27lb 4oz. fishing Nutrabait boilies over particles.

Conningbrook has been busy with new members trying their luck on this difficult venue, as in recent years at this time of year a few fish have been caught. The friendly mirror (carp) at 41 to John Patt and Tom’s pet (carp) at 30 for Dave Milne. Derek Ritchie and Danny Oldfield had the same thirty (carp) a couple of weeks apart.

Ashford day ticket fishery Hookstead Lake has fished well in recent weeks with fish to 28lb with lots of doubles. The two thirties in the lake have yet to put in an appearance to date. Contact Dave on 01233 663499 for more details.

Billy McGarry and Barry Wilmshurst have shared a seven fish haul at Cottington Lakes at Deal with six of them being twenties to 28lb 15oz on active 8.

Tom Barr at Elphicks Fisheries said his lakes have produced at least one thirty a week for the last month with many Twenties. Roger Smoothy was the capture of the last 33lb mirror from the Specimen Lake.

Lydd Waters have been slow for the anglers who are putting the time in down there at the moment with only a handful of small fish being caught. I baited a couple of swims myself for an early spring campaign on the big lake. But with a couple of anglers being reported to the fishing club for fishing out of bounds and snagging braided line around the propeller of one of the speed boats, tempers are understandably a bit frayed at the moment. So I have decided to concentrate my efforts on a couple of early French trips. With the French coast now only thirty-five minuets away from our region travelling by train we can be fishing within a few hours of leaving Kent. Next month I will be giving you some ideas on short breaks in France And results of some of my own short break sessions.